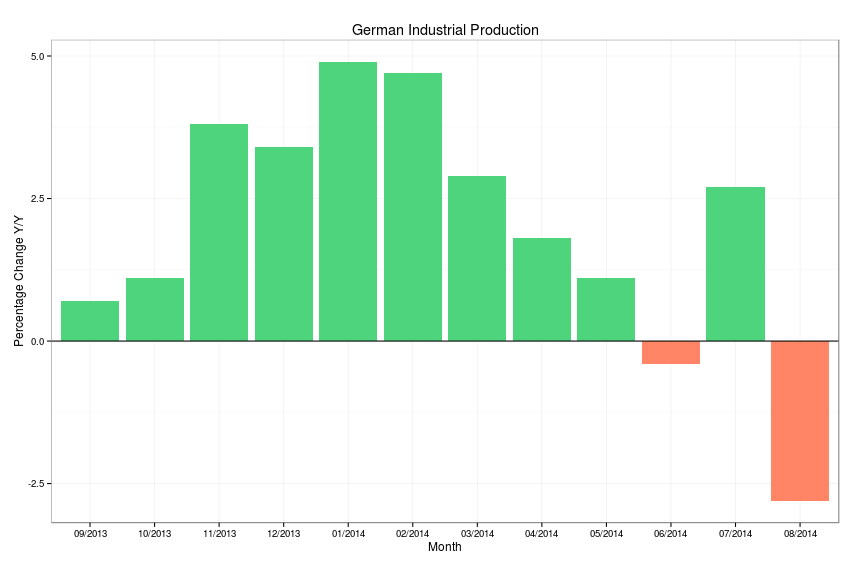 This chart shows the performance of an equal weighted portfolio of 25% TKMR, CMRX, APT, and LAKE. This is for informational purposes only and not a recommendation to buy or sell any of these stocks.
×

This chart shows the history of APT stock price over the course of similar scares.
×

This chart has shows the day of the GBSN IPO as well as the approximate time of my tweet. This is not a recommendation to buy or sell GBSN.
× 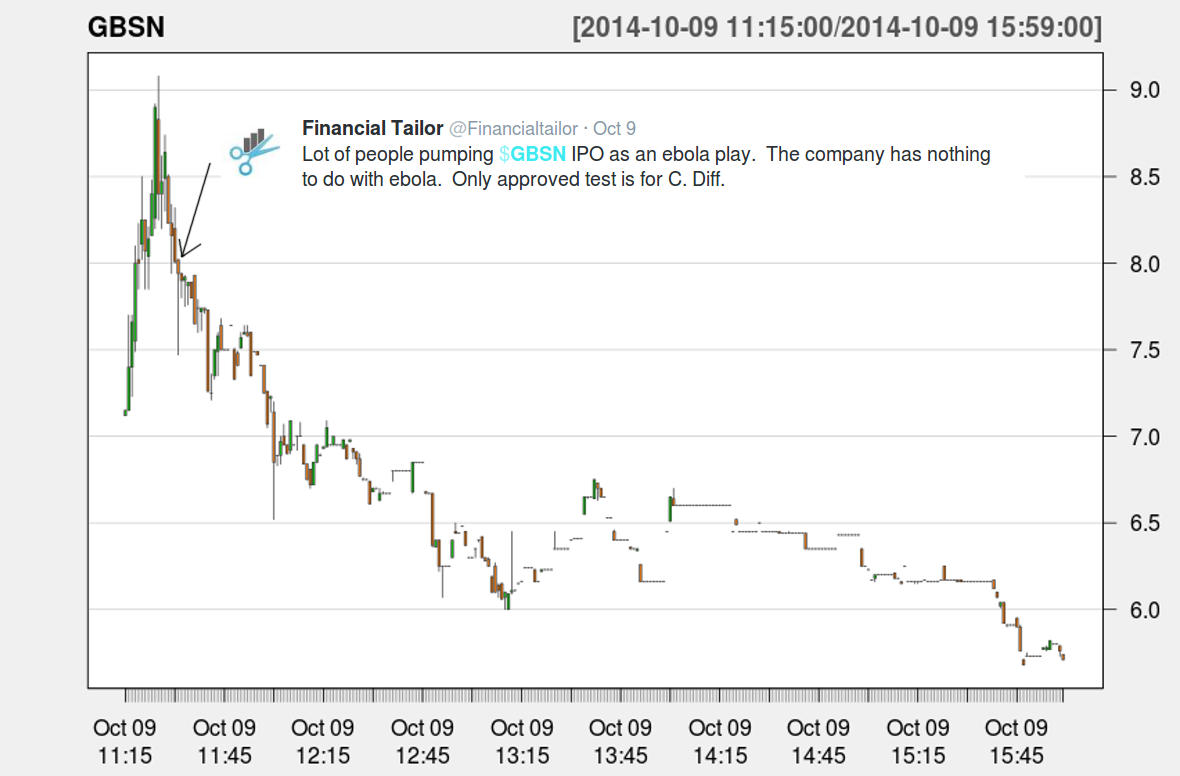 So far October is living up to its reputation as a volatile month for stocks. On Wednesday the S&P 500 posted the best 1-day return of 2014 only to be erased by the worst day of 2014 on Thursday. After the dust settled, stocks ended the week lower. Weak European data has been the driving force leading markets lower. German industrial production dropped 4% from July to August, the largest one-month drop in 5 years. The chart on the right shows how the slowdown in Europe is not just isolated to the peripheral countries. S&P also lowered the outlook on France's credit rating to negative after dropping them from AA+ to AA last year. Finland which has been under pressure because of Russian sanctions was also cut to AA+ by S&P. Despite the overall weakness in the stock market utilities and consumer discretionary stocks held up quite well, which is normal in a period of uncertainty. This week I want to look at an unusual area of the market that has been red hot lately.

Several stocks and sectors have been impacted by the recent hysteria surrounding the ebola outbreak in west Africa. Ever since the first case of ebola was reported in the United States the public has reacted strongly, and as a result there have been many false alarms and panics. Investors have been punishing airline stocks in anticipation that travel will drop due to fears of passengers contracting ebola. However, stocks that sell hazmat gear and some small pharmaceutical companies that have experimental ebola drugs have grown into an outright bubble.

In many cases, some growth in stock price is to be expected. Governments and worried individuals will likely purchase hazmat suits and masks. However, the extent of the gains in some of these stocks is downright absurd. For example, a news report may come out that says someone is being tested for ebola and these stocks may rise 10% or more in a matter of hours on the news. The chart on the right shows an equally weighted portfolio of four of these stocks. This portfolio is up over 150% in the last three months. I would like to also make it clear that I am not advocating that investors purchase these stocks. In fact, I think it is safe to suspect that these stocks will all eventually revert back to, or close to their former prices. On the flipside, this doesn't mean that it is a great time to short these stocks; their price is no longer tied to fundamentals and they could easily accelerate another 50% higher from any news event. Active intraday traders will likely have a lot of fun trading these stocks, but they should probably be avoided by long term investors for now.

The next chart on the right shows the history of Alpha Pro Tech (APT). Alpha Pro Tech makes surgical masks and eye shields used in the medical industry. APT is a solid company that is by all means doing well financially and slowly growing their business, but the recent frenzy has pushed the stock price up over 50% in one day. Fast money traders have piled into the stock just like they did in 2003 during the SARS scare and again in 2009 during the Swine Flu scare. Remember those? After the fear of global pandemic faded APT's stock price also faded back to where it was before.

The ebola scare feeds on the the 'animal spirits' of investors by tapping into people's fear of ebola and their greed to get rich quick. Investors in these stocks are not even doing basic research into the underlying fundamentals of these companies. To illustrate this point, look at the intraday chart of infectious disease company Great Basin Scientific (GBSN) on the day of their IPO. Great Basin Scientific is a tiny company that happened to catch the excitement of stock promoters on Twitter and elsewhere. Some investors were promoting it as 'an ebola play' even though the company has nothing to do with ebola, it is simply in the infectious disease category. After reading the S-1 filing for GBSN it was clear that they had nothing to do with ebola and only have one approved test for c. Difficile . Furthermore, the first line under 'risk factors' in their S-1 should have been a clear warning for investors:

"We have a limited commercial history upon which to base our prospects, have not generated profits and do not expect to generate profits for the foreseeable future. We may never achieve or sustain profitability."


It could just be a coincidence, but shortly after I shared this information on the GBSN feed via Twitter, the stock began falling and continued to do so for the remainder of the day.

It is clear to me that ebola has created a bubble in many stocks and has also depressed certain areas of the market creating potential opportunities. Ebola is truly a horrifying disease that has the power to create fear that can bleed into the investing world. That said, I suspect that the ebola scare will be mostly forgotten in a few years. Ebola is not going to put the airlines out of business and it is not going to create a neverending cash flow stream for companies that sell hazmat suits. I think pharmaceutical companies like Tekmira and Chimerix would be wise to take advantage of these temporarily higher prices by issuing additional shares to raise money in order to combat this terrible disease.

This chart shows the performance of an equal weighted portfolio of 25% TKMR, CMRX, APT, and LAKE. This is for informational purposes only and not a recommendation to buy or sell any of these stocks.

This chart shows the history of APT stock price over the course of similar scares.

This chart has shows the day of the GBSN IPO as well as the approximate time of my tweet. This is not a recommendation to buy or sell GBSN.